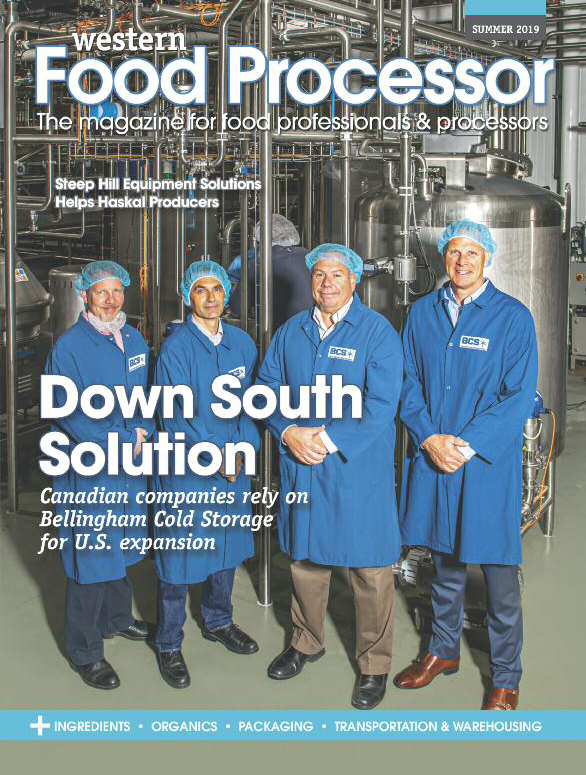 [ Editor’s note: This article has been reprinted, with permission, from Western Food Processor Magazine. To read the original, please see the magazine here. ]

Breaking into the U.S. market: It’s the most familiar objective for any western Canadian food processor seeking to expand his or her business. But it’s also an extremely difficult undertaking.

However, the number of companies north of the 49th parallel that have benefitted from the services of Bellingham Cold Storage (BCS), located 20 minutes south of the Canadian border in western Washington, is worth noting.

“Of our 250-odd clients, about 10 per cent are B.C. based,” says Joel Harvey, BCS vice-president sales and marketing.

Harvey says, “Also, many of leased processing plants are attached to our warehouses, which makes for completely controllable GFSI environments.”

Harvey goes on to note that “Canadian companies use us as a U.S distribution centre (DC) and lease our processing facility partly because of the skyrocketing price of industrial real estate in Metro Vancouver. This allows them to grow their business, which can result in them being able to establish plants elsewhere in the U.S. – although many such firms have continued to use our leased production facilities also.”

Harvey isn’t merely spouting marketing rhetoric: the Manitoba native was a seafood processor who leased two production facilities at BCS in the mid 1990s after discovering the company through a friend.

“The president, Doug Thomas, and owners could not have been more helpful or resourceful,” he recalls. “If I needed a bigger welding shop they found it for me or if I needed a refrigeration engineer to run a new specialized freezer they connected it to their engine room and provided them. They were devoted to helping their clients succeed, and shortly after I sold my company in 2014 I had the same compulsion to help other food processors. I honestly try to treat each customer the way BCS made me feel all of those years.”

The attention Harvey received as a processor was not merely happy circumstance: BCS’s owners had spent decades investing improving and tweaking their business model, not content merely just to provide warehousing and processing space but also address the changing needs of clients and use the latest technologies (for example, since the 1980s it built its own ‘WebOptics’ WMS systems to scan inventory, integrate customers’ EDI, report to them online, and program new needs).

Harvey cites Surrey, B.C.-based Punjab Milk Foods Inc. as a recent example of a Canadian firm that has improved its already formidable success, partly because in 2017 president Gurpreet Arneja decided to lease BCS’s biggest production facility (after having looked all over the U.S., they decided to stay close to home near their management team) and develop [BCS’s] plant into a state-of-the-art facility for Nanak’s dairy products.

“We are their U.S. distribution centre, we can scale our warehousing for them. They are already looking to lease more processing space from us,” says Harvey, adding that BCS also acts as The Little Potato’s Pacfic Northwest DC. Both utilized BCS’ unique chilled warehouses. “We also rebuilt a dry warehouse for Nature’s Path in 2018 and we would like to grow our dry storage warehousing.”

Unsurprisingly for a company that has helped so many businesses expand, BCS itself is undergoing further expansion.

“About 25 acres in our Orchard Campus along Interstate 5 where we will develop our 13th and 14th Leased Production Facilities, and our 19th and 20th SQF four-temperature warehouses,” says Harvey. “We would love to see a Canadian agriculture or meat company utilize our private 900-foot ocean breakbulk terminal.”

He concludes, “Since 1946 we’ve adhered to a philosophy of continuous improvement, and that’s something that will never change. We have a long track record of turning customers’ problems into opportunities, and as more and more of them turn to us for service, we want these opportunities to be unlimited.”