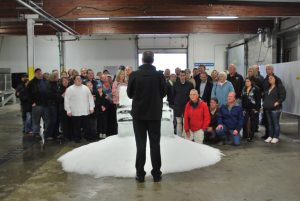 In late June of this year, Bellingham Cold Storage hosted a ribbon-cutting party for the grand reopening of the BCS Ice House. Because we were prepared for the rain that fell that afternoon, we moved the entire party into the adjacent BCS Fish House, which is all spiffed up and ready for the busy season. Everyone had a great time, with more than 75 in attendance for refreshments, snacks and tours of the new Ice House.

The original BCS Ice House was constructed during the late summer of 1945 and completed in June of 1946, when the company first began operations here in Bellingham at its Squalicum Waterway location. Several years ago, I came across an old BCS accounting ledger that was meticulously recorded in pencil from BCS’s first year in business. One of the entry pages included a full listing of the materials, supplies and equipment that were purchased in order to construct the first ice-production facility. The materials, supplies and outside services totaled just over $188,000. The newly reconstructed Ice House, including a full demolition of the old structure, will top out at a price tag of roughly $4.5 million.

The new facility has been constructed to last and is designed to remain as maintenance-free as possible. The 2012 version of BCS’s Ice House is 100-percent concrete and stainless steel, with very few components that are susceptible to corrosion. The other nice feature about the new facility is that any of the component parts, equipment, etc. can be more easily accessed for repair and/or replacement when compared to the old facility’s tighter confined spaces and/or complete lack of access around the flaker bins, conveyors, augers, flakers, etc.

The new facility has a fire sprinkler system and meets or exceeds all current fire codes and building codes. At its peak production, the old ice house was capable of producing 110 tons of flake ice per day and 75 tons of block ice per day, for a combined total of 185 tons per day. The new facility has a daily production of over 280 tons, with a holding-bin capacity of 250 tons, for a total combined maximum daily output of over 530 tons, or just over 1 million pounds per day. 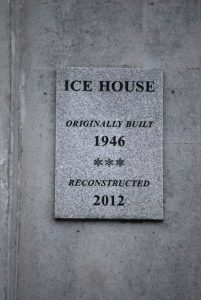 The materials, supplies and outside services for the original Ice House totaled just over $188,000. The newly reconstructed building, including a full demolition of the old structure, topped out at roughly $4.5 million.

Certainly, the old block ice house’s storage capacity of over 1,500 tons gave BCS a tremendous stockpile of ice for our busiest seasons of the year; however, the new system will provide us with the ability to increase the maximum daily output during the season from 285 tons to 530 tons, an 86-percent increase. When you are in the heat of the season, it’s all about daily output. While providing us with an increased amount of ice on a daily basis, the new facility is almost completely automated when compared to the back-breaking and often dangerous conditions of the old ice house.

The quality of the ice is significantly and noticeably better than the old ice. The old ice was getting to a point where wood, rust specks and debris from the failing building would enter the ice from time to time, requiring expensive repairs to a hard-to-access system. The new ice is clean and pure, free of any wood, rust, etc., and the system is designed to make that possible for years and years to come. The new ice is also noticeably easier to shovel and handle, as it is being produced in significantly larger flakes, which allows them to remain free-flowing without welding together as quickly when exposed to ambient temperatures. Both the customers and our employees are raving about how nice our ice is with the new facility.

It was especially nice to have in attendance many of the hard-working contractors who worked on the project and built such a nice, new facility. BCS has been working with Lydig Construction, the general contractor on the project, since 1969. Lydig, along with Mike Smith of Zervas Group Architects, did another outstanding job, leading the various subcontractors and delivering the facility to us on time and on budget. Several other important subcontractors were in attendance, including Dahl Electric; Ed Cloudy and Coastline Equipment; and Craig and Brian McCown of McCown Crafted, the insulation contractor who rushed out and supplied umbrellas for everyone during what turned out to be a very rainy day.

We also had my favorite Bellingham Herald writer, Dave Gallagher, on hand to pull together a very nice write-up in the local paper, which occurred in late June.

I also want to especially thank Homeport Seafoods, Icy Strait Seafoods, Dana Besecker Co. and Ocean Foods for being so patient while this project evolved around your areas for the last several months. And one last sentimental thanks to the hundreds of current and former BCS employees who worked in or around the old ice house over the last 67 years.

All in all, it was a great party and very well attended.

Only Your Product Gets An Icy Reception!