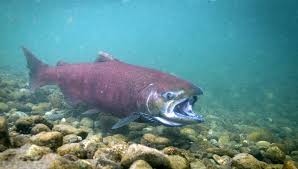 Over 800 King salmon returned to the Whatcom Creek hatchery on Bellingham’s downtown waterfront this Fall which is cause for celebration and shows what is possible with a well-funded and well-run hatchery system.

Unfortunately, the return of the Kings to Whatcom Creek has not happened in a long, long time. Washington state hatcheries are chronically underfunded and salmon numbers throughout Puget Sound remain only a fraction of historic levels.  1985 was the last time there was a good salmon run through the San Juan islands which is a tough pill to swallow for the many recreational, commercial and Tribal fishermen, let alone endangered Southern Resident Orcas.  After decades of failure, it is pretty clear Washington’s hatchery system is not working and we need to try something different.  Fortunately, we only need to look at Alaska to learn from the most successful and financially viable hatchery system in the world.

Funding has always been a major challenge and shortcoming for Washington hatcheries.  Each year, hatcheries are forced to compete for limited funding against other state priorities making it impossible guarantee appropriate production levels and run a successful hatchery program.  The Kings in Whatcom Creek were released in response to the Orca crisis, but the funding and regulatory pressure necessary to sustain these returns will likely disappear as politicians grapple with Covid-19 or the next state crisis.

Alaska uses a different funding model.  When salmon numbers dropped to historic lows in the 1970’s, Alaska set up private, non-profit hatcheries authorized to sell a small portion of the returning fish to pay for the operating and capital costs of running the hatchery.  Over time, this economic model has proven brilliant.  Alaska hatcheries are self-supporting and consistently produce enough fish to meet the needs of all fishery stakeholders.  The DIPAC hatchery in Juneau is so successful it subsidizes a visitor and cultural center, aquarium exhibits, fisheries research, scholarships, educational programs, and a public fishing dock.  Hatchery fish are strategically released in remote locations to increase habitat opportunities for juvenile salmon and allow the returning fish to take fishing pressure off wild stocks.

After visiting the DIPAC hatchery, I was so impressed that I started a non-profit organization called San Juan AREA Sea Life to promote the development of a pilot hatchery on Bellingham’s waterfront which could test out successful practices used in Alaska with the goal of permanently restoring salmon abundance to 1985 levels.  I’m honored to have received strong support from local governments, state agencies, state legislators, Tribal members, recreational fishermen, commercial fishermen, fishing processors and fishery stakeholders throughout the state.  To learn more, visit www.sanjuanareasealife.org

Developing a sustainable hatchery system and restoring salmon populations to 1985 levels will take several years, but the magnitude of the crisis demands immediate action.  Something we should do in the near-term is open an aquarium and fisheries research center on Bellingham’s waterfront dedicated to Tribal, commercial and sport fishing history and the survival of our iconic Pacific Northwest salmon and endangered Southern Resident killer whales.  Increasing public engagement and stimulating private fundraising to support scientific research and best management practices will help to ensure that our legacy of a robust salmon fishery in the San Juan Islands can be restored and maintained for future generations.  In Alaska, fisheries research is subsidized by private, non-profit hatcheries, but in Washington, we do not have this complementary critically galvanizing element yet.

San Juan AREA Sea Life is advocating for a state-funded feasibility study to look at ways Washington can improve on its existing model of hatcheries. The successful Alaska model would need to be adjusted to protect Tribal Treaty, Non-Treaty and Sport fishing rights while also protecting endangered species.  There are proven best management practices from Alaska that we can implement as part of a pilot hatchery in Bellingham that will benefit all of Marine Area 7. (Area 7 consists of marine waters south of the Canadian border containing the San Juan Islands and Bellingham Bay area.)  Trying something different will require all fishery stakeholders to step out of their comfort zone, but the bottom line is the way we have been doing things is not working and it is long past time to try something different.  In fact it is long past time to try something that has been working successfully in Alaska for over 35 years.  More fish will benefit everyone.